Here is the video promo of the fourth edition of Live Cinema Festival that will take place in Rome from September 21 to 24 with a preview of the section Screenings from 1st of August to 20th September in MACRO – Rome’s Contemporary Art Museum.

When it comes to its fourth edition, Live Cinema is a unique review of its kind that investigates and promotes all the artistic phenomena attributed to the term “Live Cinema” through unpublished performances or for the first time presented in real time in Italy. Performance that breaks the rules of traditional narrative definitively, aim to arouse sensations and emotions, favor a sinesthetic approach.

The event is produced by Flyer Communication with the support of the European Commission’s Creative Program, the Free Hardware Foundation, the French Institute of Italy, the Austrian Cultural Forum, the Polish Institute of Culture and a local and international network Linked to performance video audio and the new forms of experimentation of new technologies in the artistic and cultural sphere. “Live Cinema Festival 2017” is sponsored by Sovrintendenza Capitolina ai Beni Culturali and is part of the Estate Romana program promoted by Roma Capitale – Assessorato alla Crescita Culturale and realized in collaboration with SIAE.

“Live Cinema” is an experimental narrative technique applied to performance video, which creates the simultaneous creation of real-time sounds and images, in which the traditional parameters of narrative cinema, represented by the photographed subjectivity of the chamber, expand into A wider concept. Machines, art and technology join in the 4 days of the festival to spread new messages and new perspectives, proposing a new imagination, cutting boundaries between media and content, manipulating images and using different approach techniques to creating final content, fruit improvisation and the ability of artists. 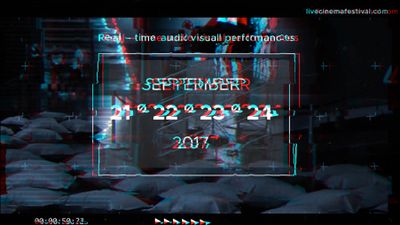 This website uses cookies to improve your experience. We'll assume you're ok with this, but you can opt-out if you wish.AcceptRead More